The priority tasks of the Municipal Police of Krakow are improving law and order and sense of community safety. 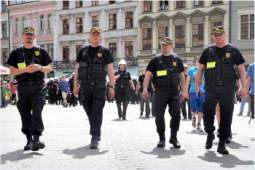 The tasks performed in this regard by the Municipal Police of Krakow should respond to:

Another priority task is "Zero tolerance for alcohol".
People under the influence of alcohol, regardless of their behavior , often cause disgust and raise fear. The municipal police officers intervene in cases of drinking alcohol in places where it is prohibited. If one's conduct due to the influence of alcohol gives rise to scandal, threatens  his own life, health or creates such a threat to others, municipal police officers should bring that person to his place of residence or to the detoxication ward.

In the course of their duties, the municipal police officers intervene when the provisions of the Act on cleanliness and order in the municipalities and the records of City Council Resolution on the rules of cleanliness and orderliness in the Municipality of Krakow are broken. It is another priority task of the Municipal Police of Krakow, when the  municipal police officers pay special attention to the proper management of waste and impurities. Specialized ecological police patrols control the places where illegal dumping of rubbish and waste takes place.